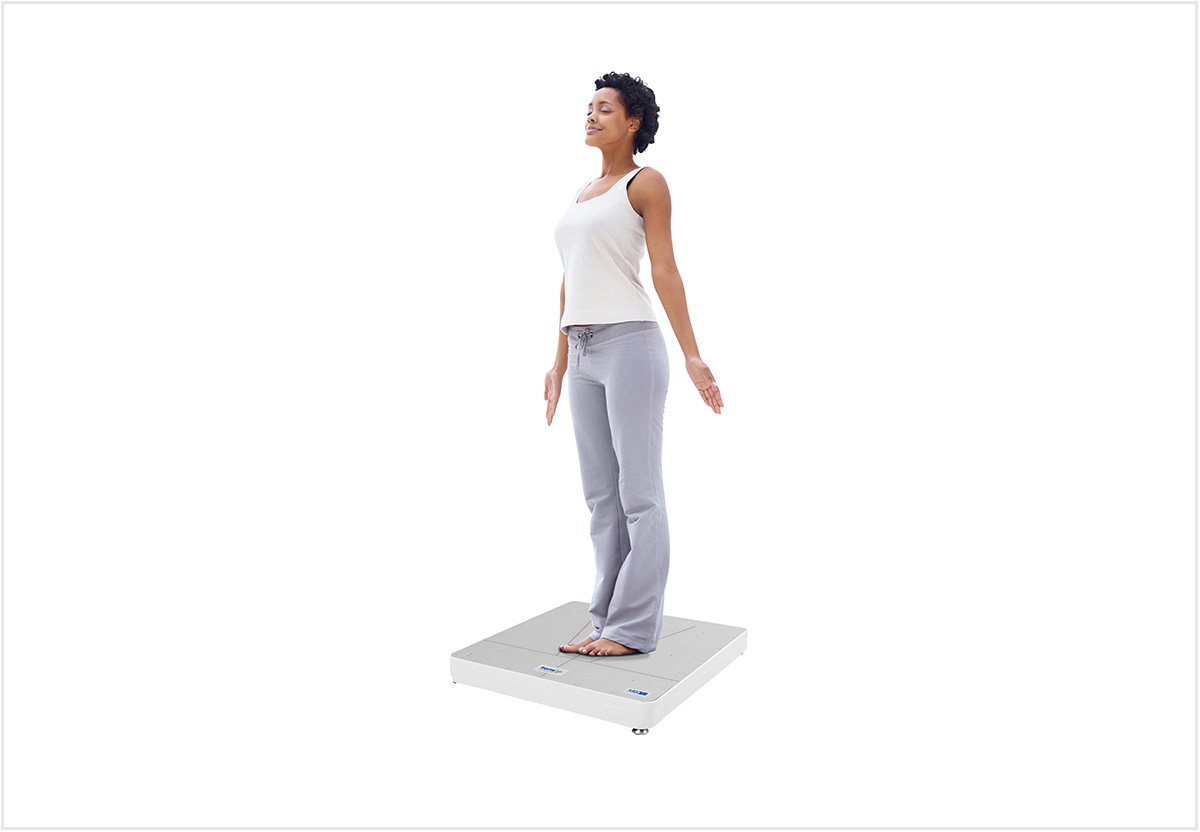 16 Nov Reading the results of the standard stabilometric test

Posted at 09:22h in news-events by webmaster

Introduction and purpose of the Romberg test

The purpose of this document is to illustrate the Romberg Test, its execution on the ArgoPlus Stabilometric Platform, the parameters that the instrument provides and the criteria for interpreting them in order to allow the clinician not only to recognize and quantify the possible deficit but also to identify, in the results, the indications for a further diagnostic investigation. In addition to the Romberg test, the device also allows different types of assessment tests in different postures and modes.

The Romberg test¹,²,³ in standardized version, is of particular diagnostic interest (in fact it allows the assessment of the risk of fall and guide in the choices of a possible diagnostic investigation) and therefore it is precisely examined in this document.

The static stabilometric test consists in the detection of the trajectory followed by the COP (point of application of the resulting pressures exerted on the ground through the soles of the feet to counteract the normal torque that would make us fall) while the patient maintains the upright unperturbed stance. The control of the movements of the body segments in the execution of the task involves:

Vision: the two eyes provide ``stabilizing`` indications, especially in the presence of a specific visual reference;

Musculoskeletal proprioception (joints, muscles, tendons and skin): allows comparison between the current and desired positions of body segments for the execution of the motor scheme;

Central Nervous System (CNS) in all its components: it implements the ``individual motor schemes``, in order to execute these patterns in the correct sequence, updating the commands on the basis of proprioceptive and externoceptive return information.

It is important to remember that in the upright unperturbed stance the vestibular contribution is present only in case of anomalies⁴.

In 1836, Professor Romberg proposed a test that, in comparing the oscillations (Sway) measured in the maintenance of the position with closed eyes (where only musculoskeletal proprioception is active) and opened eyes (where visual perception is added to proprioception), allowed the immediate appreciation of the proprioceptive functionality to be associated with central control mechanisms.

With the use of the Static Stabilometric Platform endowed with metrologically validated performances⁵ and employing appropriate processing algorithms, it is now possible to provide an instrumental evaluation of higher sensitivity and accuracy, independent of the operator and therefore repeatable, with a variety of parameters that allow to suggest, in a motivated and objective manner, the possible presence of causes of postural instability.

The essence of the Romberg Test is in the comparison of the results of two measurements, in the exact same conditions, one with closed eyes and the other with opened eyes.
Despite being a controversial topic, in ArgoPlus the standard test is performed⁶ as follows:

with joined and parallel feet (internal malleolus and joints of the big toes in contact);

with arms freely hanging at the sides, head erect, closed mouth with no tightened bite;

positioned on the force platform so that the face of the subject is about 1 m from the wall without any linear reference (it is recommended to apply a round black stamp, with a diameter of 30 mm placed at the height of the nasal saddle of the subject in test);

carrying out the first test with eyes closed and then with eyes open (the order aims to prevent influences through the memory of oculomotor muscles);

the acquisition duration is 40 seconds preceded by 5 seconds of adaptation that are not used in the processing of the parameters.

For the test performed in these conditions there is a robust standard of normality.

Performing the test on ArgoPlus

To perform the ArgoPlus test, follow the procedures below:

a) Register the patient with personal data;

b) Register the test request for the specific patient;

c) Select the patient from the list of sessions to be performed (patients for whom, in the session list, there is no date in the last box on the right);

d) Complete the patient card with the anamnestic data (established pathology according to the ICD coding, functional dysfunction/abnormality accompanied by evaluation of loss of function made by the examining clinician according to the ICF coding, disability evaluation by means of the WHODAS questionnaire; free text space …);

f) Check the status of the platform, making sure that the battery is charged and that the platform is leveled (green lights on the top of the screen that will appear selecting – in the upper right corner – FORCE PLATE STATUS);

g) Request that the patient steps on the platform with the correct feet position;

h) Enter the command Start. A new screen containing the following graphs will be shown: statokinesiogram on the left, the stabilogram on the right and below this, at the end of the survey, the frequency analysis;

i) Save the test by asking the patient to retain the position;

k) Enter the command Start and, at the end, save the test and select EXAM COMPLETED;

l) The patient can step down from the platform.

Reading and interpretation of results

From the REPORT page select the patient who has been tested.
The exam page will appear. By selecting the two tests in sequence, it will be possible to see, under the graphs, also the “page” of the numerical values of the parameters processed.

The same, below mentioned parameters, represent:

On the basis of the above it will be possible to select GENERATE REPORT WITH ROMBERG: the two sets of graphs and a single page of data with the indication of automatically generated annotations (that can be selectively accepted and inserted in the report that will be enriched from a free text) will appear.

VALIDATING the Report will generate the document in .PDF format, automatically accompanied by the name of the referring clinician (complete with any signature in graphic format).

The attached report provides an example of the above.

On the first page the patient card with the ICD and ICF codes as well as the WHODAS test sum-mary performed on the day of the test are shown.

In this example, the free space in which the patient’s medical history could have been included has not been used.

In the second page the graphs are shown.

In the third page the values of the parameters, which allow to obtain the following observations, are shown:

(2) The morphology of the Ellipse of Confidence of the Closed Eyes survey, which is very long on a diagonal, could suggest the presence of vestibular deficits; this explains the signs of centrality exhibited in the Stabilogram

(3) The harmonic analysis of the Closed Eyes survey shows three harmonics of anterior – posterior oscillation at the cervico – thoracic, thoraco – lumbar and lumbosacral hinges, a sign of a postural imbalance that is compensated in the Open Eyes survey. The latero-lateral harmonic is worth mentioning in the sacro-iliac district. The latero-laterality sug-gests to be a disorder outside the symmetry plane that could correlate with a monolateral symptomatology of sciatica.

(4) The ratio between the values of Sway Area and Sway Path of the Opened Eyes survey, in comparison with the Closed Eyes analogue, shows an increase in the postural tone in the Opened Eyes survey, although both are within the limits of norm. The difference (generally the opposite is observed) could be a sign of an insurgent neurological problem

(5) As reported by the asterisk, the subject presents antero-posterior oscillation values of the Closed Eyes survey outside the normal limits.

(6) The “numbers” confirm the assessment of the morphology of the Statokinesiogram of the Closed Eyes survey: the ellipse is excessively long and

(8) The spectral powers of the low-frequency antero-posterior oscillations of the Closed Eyes survey, as shown by the graph, are outside the range of normality.

(9) The index of postural functionality of the Eyes Closed survey shows that in the test with Closed Eyes, the subject presents an index out of the limit of normality in such a measure as to make it possible to consider an accidental fall that

(10) Could possibly occur backwards. This, in a poorly lit environment.

Based on the assessments above, the clinician will be able to draw up a detailed report that is well supported by the evidence.

b) If at least one value of SPF> 9, it is worth investigating further.

c) If the quotients of Romberg are out of the range of normality, a proprioceptive deficit can be hypothesized, viceversa the following conditions must be verified:

c1) the conditions for the possible presence of vestibular deficit (Closed Eyes ellipse with axle ratio >> 1.5 and inclination close to the diagonals)

c3) and, in the case of proprioceptive deficit that does not fall into the two cases mentioned above, assuming a musculoskeletal etiology, it is necessary to examine the harmonic analysis to identify the presence and localization of possible focuses that interfere with proprioception.